James Dean spent a short 24 years on Earth, but he left a huge mark on the world. The famed actor only appeared in three major films but became a true Hollywood icon.  While most people knew him as a Hollywood actor, many in Grant County knew him as the neighbor boy who showed amazing potential and extraordinary talent.

James Dean was born on February 8, 1931, to Winton Dean and Mildred Wilson Dean. They lived in the Seven Gables apartment house on 4th and McClure Streets in Marion, Indiana. James was Winton and Mildred’s only child and they affectionately nicknamed him “Jimmy.”

Soon after his birth, the family moved to nearby Fairmount where Winton Dean’s parents and sister lived. In 1935, Mildred Dean enrolled her five-year-old son in the Marion College of Dance and Theatrical Arts. His first stage appearance was as a dancer in the school’s revue. His mother instilled the love of arts in Jimmy. She would spend hours reading poetry to him, played piano for him, took him for long walks in the country, and even made a puppet stage where they would act out stories together. As soon as Jimmy was old enough to hold a violin, he was given violin lessons.

The Move Out West

Winton was a dental technician at the VA Hospital in Marion, and was offered a job at the Sawtelle VA Hospital in Los Angeles when Jimmy was five years old.  Since jobs were scarce during the depression era, the Deans grabbed the opportunity for a better life.

Tragically on April 14, 1940, Jimmy’s beloved mother died of ovarian cancer when Jimmy was only nine years old. His father sent him to live with his aunt and uncle, Marcus and Ortense Winslow, in hopes that the Winslows could provide a stable, secure family life for his only son. Jimmy soon called Winslow Farm, a large working farm in Fairmount, Indiana, home.

While Jimmy lived in Fairmount, his life was like any other rural kid’s life. He helped out on the farm and enjoyed riding his motorbike in the fields to help round up cattle. He could stalk rats in the barn, loved riding the pony given to him on his 10th birthday, and took good care of his rabbits.

In an interview with Hedda Hopper, he recalled his life in Fairmount:

“This was a real farm and I worked like crazy when someone was watching me. Forty acres of oats made a huge stage and when the audience left, I took a nap and nothing got plowed or harrowed.”

Jimmy attended elementary school in Fairmount and played on the school’s basketball team. His Uncle Marcus set up two basketball hoops inside the large barn on the farm. He also created a pole-vaulting pit for Jimmy, and he added lighting on the property’s pond so that Jimmy and his friends could play hockey in the winter.

Jimmy started high school in 1945 and his versatility became readily apparent. He was a champion pole vaulter, competed in hurdles and ran on the half mile relay team. He played third base and was a solid batter on the school’s baseball team and an incredible guard on the basketball team. Jimmy was the leading scorer in basketball his senior year. He discovered his love for the performing arts while studying drama and competing on the debate team. He continued to act in plays all throughout high school. 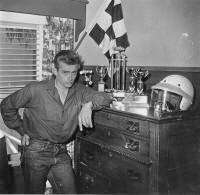 Uncle Marcus noticed Jimmy’s need for speed and bought Jimmy his first motorbike, a 1946 Whizzer. Jimmy was often seen on the farm and around town thoroughly enjoying riding that motorbike. Jimmy then got a Czech 125 (CZ) motorcycle that he rode to school whenever the Indiana weather permitted.

Dean graduated with the Fairmount High School Class of 1949. At his May 1949 graduation he received the top award for art as well as awards for drama. He also received a medal inscribed “Jimmy Dean, Fairmount High’s Top Athlete of the Year.” After graduation, Jimmy moved back to California, living with his father, and studied pre-law at Santa Monica City College. Dean eventually transferred to UCLA and changed his major to Theatre Arts, his true passion. 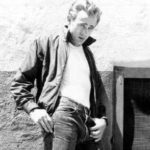 Jimmy rose to fame and gained the reputation as the original Hollywood rebel, James Dean. Despite that reputation, Jimmy maintained a close and loving relationship with his family. His Uncle Marcus and Aunt Ortense visited him in California shortly before his untimely passing.

James Dean visited his hometown in February. During this visit, he playfully posed in one of the Armes-Hunt Funeral Home’s display coffins. Tragically, James Dean would return to the funeral home six months later for his own funeral service. James Dean died in a now infamous car accident on September 30, 1955.

James Dean’s funeral was held on October 8. An estimated 600 mourners were in attendance for his funeral at the Fairmount Friends Church, located a short distance from the current James Dean Gallery. Another 2,400 fans gathered along the funeral procession. A pink granite headstone marks his grave in Park Cemetery.

Even though it’s been 64 years since James Dean’s passing, fans and mourners still gather to honor his memory. Adoring fans kiss his headstone, leaving lipstick marks year-round. The James Dean Memorial Service is held annually at Back Creek Friends Church on September 30. The James Dean Trail allows visitors to relive his life in Grant County and see the very places that created Hollywood’s original rebel. 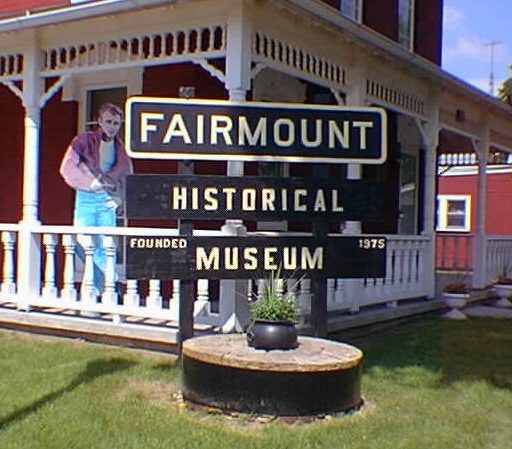 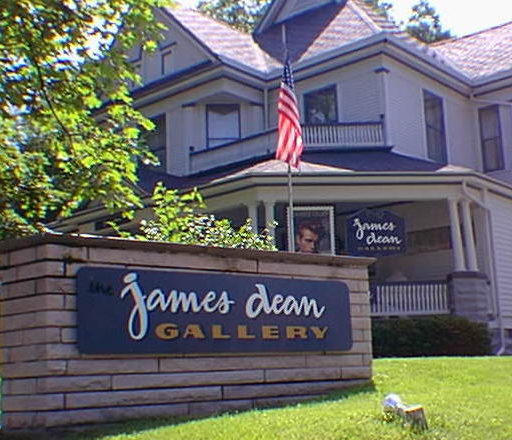 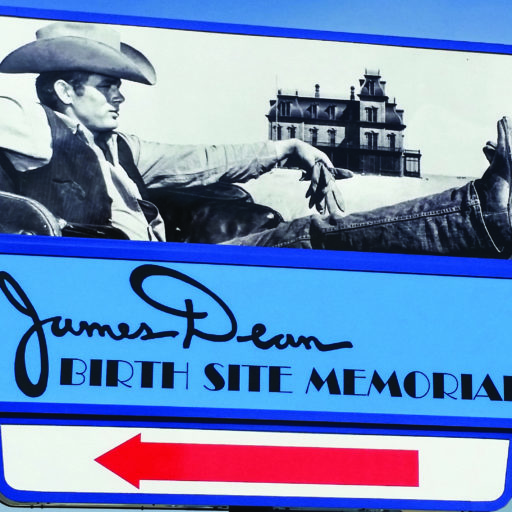