Garfield, the lasagna-loving fat cat, has roots right here in Grant County. Garfield’s creator, Jim Davis, grew up in Fairmount Indiana on a farm with – you guessed it! Cats! Lots of them!! His childhood doodles eventually evolved into the beloved characters we know and love today. 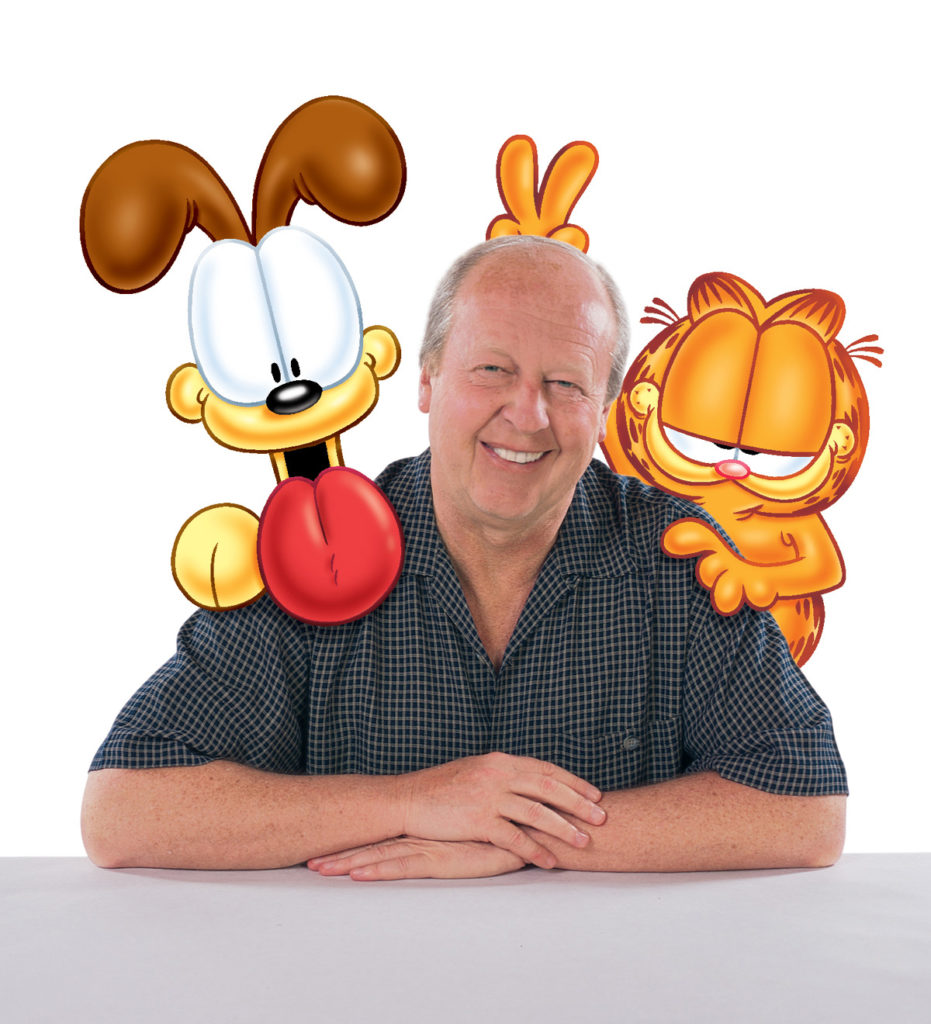 Jim Davis, spent his childhood on a farm in Fairmount with his parents, brother and 25 cats. Yep, 25! As a child, he spent time doodling. Eventually, he attended Ball State University, close to home in Muncie, to study art and business. One of his first attempts at a cartoon strip was called Gnorm Gnat, but the newspaper rejected it, saying that a bug was unrelatable.

Undeterred, Davis literally went back to the drawing board to develop the perfect critter to star in his comic strip. He noticed there were a lot of strips about dogs, but none about cats. Upon that revelation, he began sketching cats based off of the strays on his family farm, eventually settling on an orange, lazy cat. And then, a star was born! 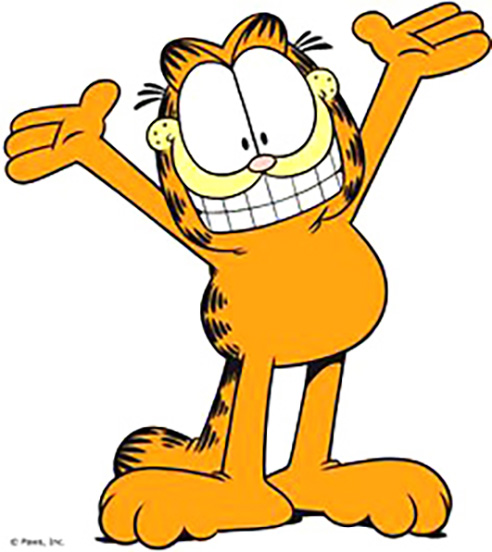 Davis lovingly named the cat Garfield. On June 19, 1978, the first Garfield strip was published. The fat, lasagna-loving cat quickly became a fan favorite and remains one of the most popular cartoon characters in the world. Comic readers love Garfield’s cynical antics, lazy demeanor and witty sarcasm. Occasionally, Garfield lets his softer side show, but that’s usually only reserved for his beloved teddy bear, Pooky, and only when he thinks no one is looking.

To pay homage to the cool cat, communities throughout Grant County installed statues of Garfield. Each of the 14 glossy fiberglass statues reflect the heritage and character of their location. The Garfield Trail begins with a mellow Garfield in Marion. Grant County visitors can easily spot all of the Garfield statues, along with his comical hijinks, all in one day. 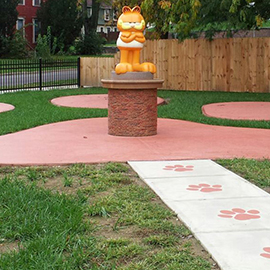 Discover Garfield posing in a paw print-shaped Garden. Take a selfie, posing cross-armed with the sarcastic cat. Pop in and staff will unlock the gates for you. 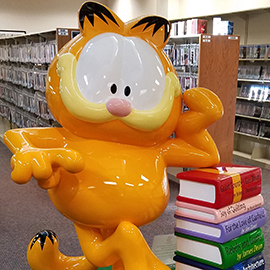 Garfield loves learning and reading. He is a comic book star, afterall. Each book on Garfield’s stack tell the history of Grant County. While visiting the Library, be sure to check out the “History Made Here” exhibit. 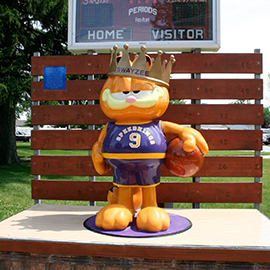 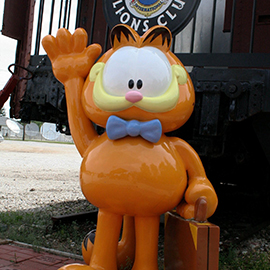 Garfield is dressed to impress in a light blue bow tie and hat. He’s carrying his suitcase ready to board the boxcar. The former Sweetser railway is now a trail that’s connected to the Cardinal Greenway. In addition to Garfield and the boxcar, the trail features interesting statues. 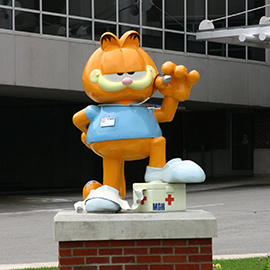 Garfield looks ready to help with his stethoscope, gauze and first aid kit. These heroic doctors and nurses are prepared to spring into action in any medical situation. Garfield is here for cute support. 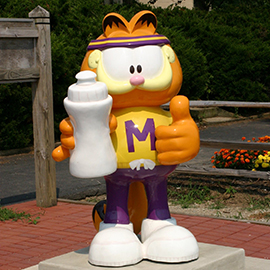 Jogging really isn’t his style, but the fat cat hits the trail in his Marion sweat suit and sneakers. When you are a star, you’ve got to at least look the part, right? Starting at Matter Park Gardens, Garfield can meander the Mississinewa Riverwalk all the way to downtown Marion. 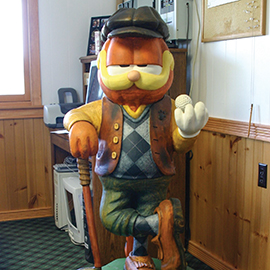 Garfield is ready to hit the green in his Scottish golf knickers as Grant County’s only wooden Garfield statue. To protect it from harsh weather, this Garfield statue is on display April through November during daylight hours. 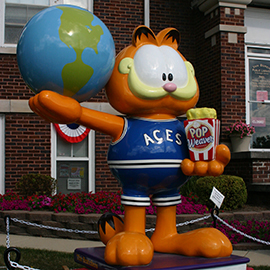 The lasagna-loving cat has another delicious snack favorite – popcorn. Van Buren is home to Weaver popcorn, so it’s only fitting that Garfield is ready to sample. He wears Van Buren’s former high school’s athletic team uniform while holding a globe. Look closely at the globe, and you’ll notice a piece of popcorn marking Van Buren’ location. 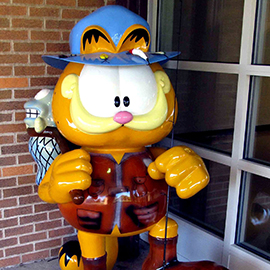 Garfield has all his gear and is ready to go fishing on the Mississinewa River. Not even tempted to eat it, he is holding his catch of the day on this back. He’s not too far from Cumberland Covered Bridge, which is another favorite fishing spot for locals. 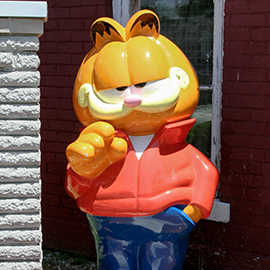 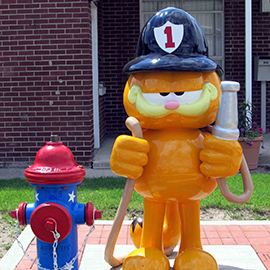 Jonesboro is the home to the first volunteer fire department in Grant County. Garfield wears his helmet and holds a firehose, standing by to support the firemen. 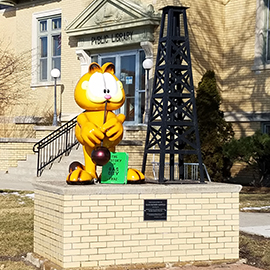 Gas City was founded when natural gas was discovered in the area. It quickly became a boom town. Eight glass factories popped up around town. To celebrate this town’s heritage, Garfield tries his hand (paw?) at glass blowing. 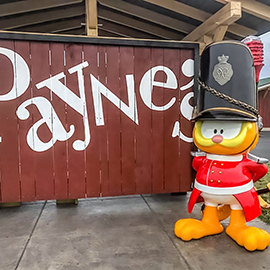 As the newest addition on the Trail, Garfield stands on guard at the English-themed restaurant. Donning a bright red coat, sword and tall hat, he can’t be missed. He must have gotten the idea when he was on set in London for Garfield: The Tale of Two Kitties. 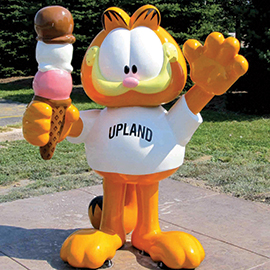 There’s no food this cat can’t conquer, including Ivanhoe’s 100 milkshake and 100 sundae flavors. He hasn’t earned his place on the 100 Club by trying every flavor, but it isn’t for lack of trying.

Garfield is beloved throughout the world, but especially in Grant County. We look forward to sharing this hometown favorite with you. 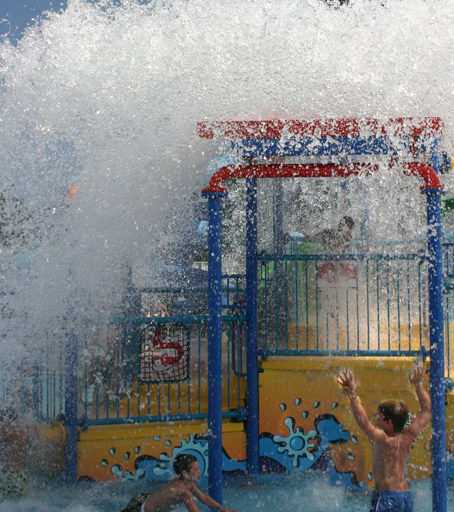 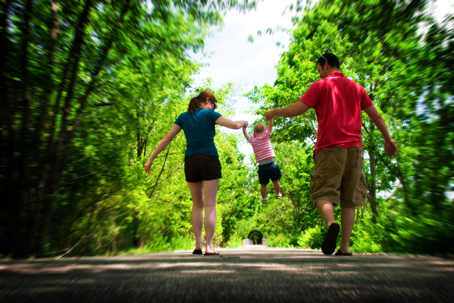 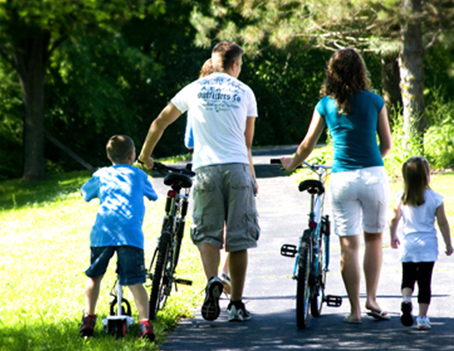